From the darkness of the trees, a distant outline was cast upon the skeletal bones that were shattered on the graveyard. A slouching shadow emerged from the shrubs and bushes: his toenails were scraping at the barren ground beneath him; bony feet were disturbing the rattling bones; hairy legs parted the bushes like a dagger through a heart; scrawny fingers shoved the trees aside with no respect. A dishevelled body stood at the foot of a derelict hut. But that wasn’t what he wanted.

The skeletal graveyard was covered by a taunting figure. It progressed up the hill to what it wanted: an intricate wooden building that stood at the top of the hill. Heorot’s place. The peace was going to be shattered once more.

As the shattered bones were parted by his grimy foot, Grendel reached for the door’s handle. Beowulf and his men lay inside the grand, intimidating hall as the colossal doors creaked open. The black outline of a hairy, slouching beast stood at the foot of the mead-hall. The figure that was towering above them, set Beowulf and his men on high alert as if hawks stalking their prey. Then the hawks went in for the kill! 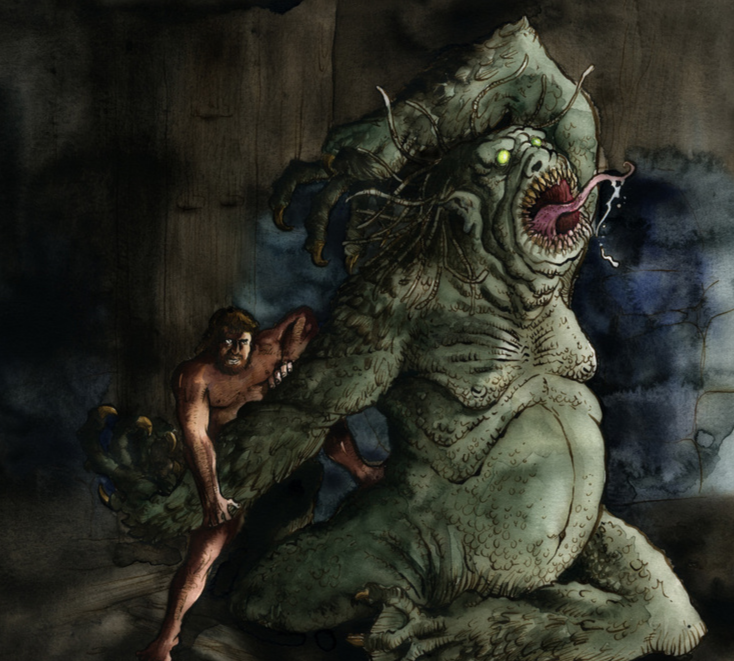 Beowulf leapt up from his seat and grabbed Grendel. This grip that could take up to 30 men in each hand was concentrated all on one place: the ever-tightening grip was strangling his arm. Grendel was fighting for control over his limb as Beowulf tightened his grip even more. Thirty men were squeezing his arm and draining it of life. Slowly, Grendel was losing his life and his soul.

The purple arm was hanging off as the great mead hall was filled with blood. His gritted teeth splashed drool upon the tapestries. Sodden and red, the mead-hall’s walls were strained for as long as it stood. His arm was eventually giving in. It dropped off.

Beowulf wasn’t going to get off lightly though. He yanked down on his feet and as he suspected, there was a snap that came from the demon’s toes. The slouching slaughterer has said goodbye to his yellow, overgrown toenails! Five oozing sockets had appeared on each of his feet and his mouldy nails now littered the floor.

A hobbling beast burst through the grand oak doors and into the dark abyss of trees. Beowulf suspected that Grendel would not be visiting Heorot’s mead-hall for a few years to come. Not until his toenails had grown back for sure.

Once word had reached King Hrothgar, he invited them to a feast in celebration. Sure enough, Beowulf accepted the invitation and arrived at the mead-hall later that night.

The tapestries had been changed and the wall had been painted. You would never have known what went on just a couple of hours before. The tables had been laid out and the chef had prepared the finest dishes especially. Beowulf enjoyed knowing that they would never forget him as the yellow toenails were hung from one of the great oak beams.