what could go wrong before christmas...... 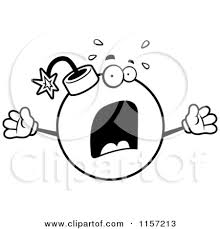 2. could get Santa napped by one of those people who hate Christmas or really really naughty boys from a young .

3. Somebody could get Santos toys and run away with them whilst wearing Santa's clothes.

now I'm going to short comedy story of Christmas at the north pole;

One at the north pole, all the elves were all the presents,but all of a sudden there was a strange rumbling sound but no one checked it out so they just left it and on packing, but it again but from the top floor.One of the elf Benny cried"wwwwwwhat wwaas ththththaaat".The manager elf came and heard crying, the stormed out of his office to see what little pity what was Benny was crying about.Just before the manager could take a one more, the strange rumbling had happen again everyone jumped there was complete silence."I'm going to check it out don't move, Max, Troy and Pete come with me" they replied "yes sir," in a grumpy voice.As they up the stairs it became louder and louder."I'ts coming from Santa room"whispered Pete "I know mate" replied troy. Pete went in allowing the to creak open, as they all in, they all sighed in relief "I'ts just santa".