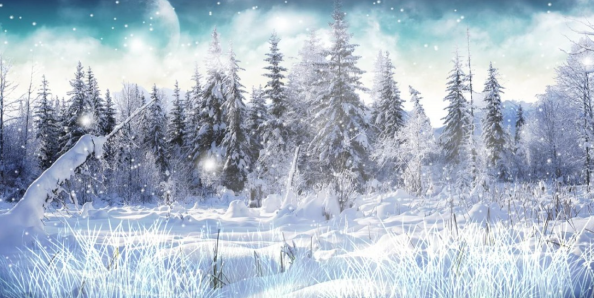 Outside, the wind whipped the snow across the roads.  Already you could barely see anything.  It was too cold to be out.  The snowstorm blindfolded the town, muffling the world in white silence.

Inside the warehouse, it was quite dark.  Years of dust had covered the windows with a thin layer and only a faint light filtered through.  Each footstep echoed, leaving behind a trail of footprints through the dust.  Boxes of different sizes were piled high, like strange towers.  Cobwebs hung between the boxes like lace nets.  An abandoned ladder lay at an awkward  angle across what looked like an old television set.  Its wires spilled out.  Max stood still for a moment and let his breathing settle.

It was then that he heard it.  The faintest of sounds – a floorboard creaked.  Then, another.  He stood quite still, his senses alert, straining to listen.  For a long while it was quite quiet – only the distant murmurings of the wind drifting snow.  Then somebody coughed …

Outside, of Maxes warm cosy log cabin the wind whipped the snow across the roads, like a blazing snow blizzard.  After only an hour of the ferocious snow, the whole town was covered in three inches!  It was way too cold to be outside.  The snowstorm blindfolded the town, muffling the world in the white silence of storm Frostbite. It was horrible if he went out (his hands would feel like icicles if he went out for only five minutes).

He decided to go out. The snow engulfed his feet, CRUNCH! CRUNCH! On the horizon he saw a bleak outline of a warehouse. He was going there. On his trek up to the warehouse he saw faint footprints, that had been swallowed by the snow, going up to the building. "Was there someone there? Am i safe?"

All these questions were flooding through his head like a raging river. He didn't know whether to go back or look inside. His curiosity got the better of him.

As Max crept up to the warehouse, he could hear eerie noises surrounding the place. Despite the noises, he decided to go in. There was not much shelter there as the roof was half broken. Max could hear chatting coming closer to him (his heart was thumping as fast as anything). He stood as still as a statue, when all of a sudden he heard "Wakey!Wakey!Max its mornin'." It was all a Dream...