On Thursday 2nd February year five set out on what many would consider a herculean task: To write and perform an epic tale, with no preparation or script, in just five days.

To put that in context, a two hour film can spend up to five years in production, and will likely focus on just a few characters at a time. This story would be much longer, and have as many as thirty three characters throughout - one for each member of the class.

On day one, the focus was clear, we were never going to all be on the same page unless we had a framework we could all share. So after some practice in the hall standing up and getting our brains in gear, we sat down to learn The Story Circle, based on Joseph Campbell's text The Hero with a Thousand Faces.

This is a stripped-down version of a degree-level screenwriting technique. 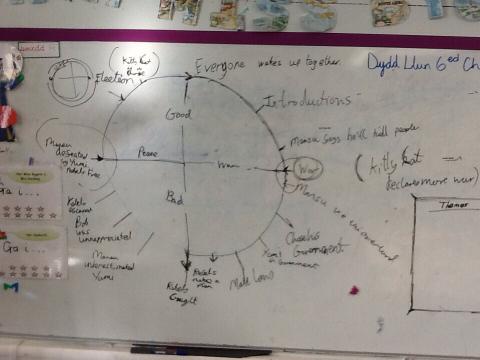 Spoiler alert, that circle contains all the work we noted down at the end of the project.

Over the course of a day, we went from writing simple three line stories with just a beginning, middle and an end, toward struggles about heroes overcoming odds and clashing with difficult challenges.

On day two, it was time to decide who our heroes were, and why. We started to develop ideas about Character development in depth, both in performance and in writing. Creating a character on the fly on stage in front of a group is a very different challenge to writing out facts about a made up person on a piece of paper. The kids were challenged with portraying a character's job and emotion with acting alone in front of the class, and then with putting those characters together into scenes in which invented problems forced them to question how a certain person may react in a strange situation.

I don't know if you've ever stood up in front of a group of your peers and pretended to be in a crashing airplane with no script, but it can be daunting, not least because something funny is bound to happen, and it can be hard to delineate between those laughing with you, and those laughing at you. The enthusiasm on display was impressive.

From there, we sat down to create a character in depth. Each person got to invent their own person, with fears, and hopes and dreams and special powers if they wanted. these characters would go on to become the focus of our story in the next few days, so they had to rich and vibrant, and stand up to scrutiny. Here are a few (pulled at random):

Charlie, a Twelve Year-Old Orangutan from Vine Village, who wants to the King of the Jungle, but who is afraid of Tigers.

Flames Boy, a Thirty Year-old Businessman. He lives in an ordinary house and drives an ordinary Lamborghini. He's a super hero in his spare time.

Dr. Pepper, who is from California and is afraid of children. His Nemesis is Pickled Onion (who is a Pickled Onion).

Next we set about making masks, to represent these characters, so it would be easier to tell when we were acting and when we weren't. Of course, it can be hard to create a mask that accurately depicts a sentient pepper pot, so in most cases it was decided to settle on a colour or a theme for your character, and to make the mask represent that.

These were then left to dry over the weekend. 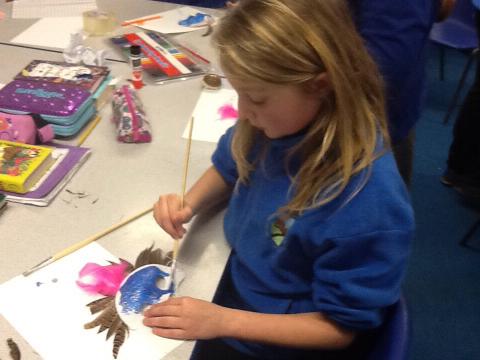 When we got in on Monday morning, it was time to get down to business. We had three days left to create a satisfying narrative, to explore each of the characters we had made, and to make sure that everything was recorded and that all the ideas and themes we stumbled over on our journey were explored and understood.

After a warm up and some improv excercises in the hall, we ventured out into the grounds despite the cold and the wet, to stake a claim on this land for the characters who now lived there. It didn't take long for our introductions to take a turn, and within the hour, spurred on by a vocal contingent of the group who advocated character-on-character violence, we had a succession of people standing up and delivering impassioned stump-speeches on the moral balance between violence and peace, good and evil.

But when there were no more words to utter, it became clear that there was only one recourse left by which this dispute may be settled. Those who advocated aggression saw that their counterparts for peace would not engage them on their terms unless a show of force was demonstrated. War was declared.

And so began the main chapter of our tale, which is now being chronicled and will be set into writing and told for seasons to come you can be sure. There was war, a bloody dictatorship, a desperate rebellion, economic prosperity in bleak times, devious subterfuge, assassination and resigned democracy. And in the end who can say whose side the historians will take? 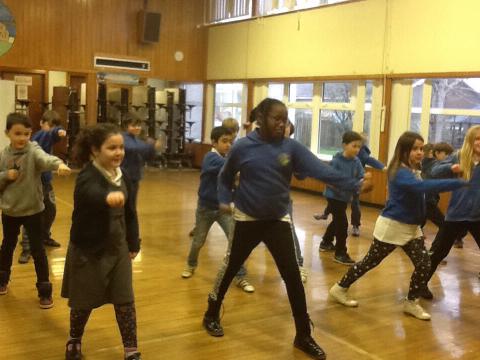 As the artists and historians of our own tale, it is now to the class to decide how the epic struggle will be remembered. Working with monument ceramicist Rebecca Buck, they are undertaking the construction of a great totem, to be erected as close as is practical, to the place where their characters first awoke. 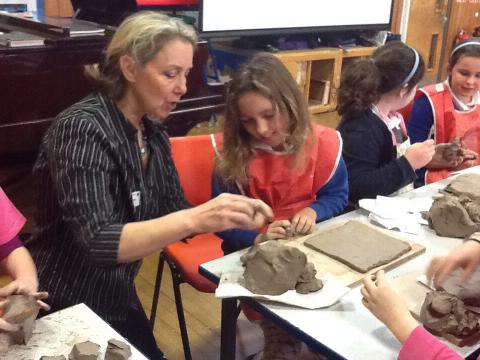 It will take the form of an eternal throne, upon which you can depend many kings and orators and dictators and prophets will take their place, for it will stand for many centuries (indeed, it will likely outlive the school so long as it is not purposefully destroyed) and will we hope, not only affirm to generations as yet unborn that this school was lived in and played in before their time, but also that their struggles, their games, their questions are themselves eternal ones.

What is heroic? How can we be strong? What determines the right to lead? How do we shape our own lives, when there are always those who will try and shape them for us?

I, having had a chance to get to know them and work alongside them, am immensely proud of year five. They rose to the occasion admirably, and proved themselves capable of tackling ideas and problems above their regular curriculum. They created challenging and evocative ideas that broke the regular mold that is so often written off as 'just kids stuff'.

If you as a parent want to get involved in the last stages of the project (particularly the Sculpture Installation), please get in touch with the school, and stay tuned for information on our grand unveiling over the next few months, where we will show off the monument to the world and were there will be a dramatic retelling of the tale we wrote.

This Guest Blog was written by Daniel A. Buck, Lead Creative Schools Practitioner and Freelance Writer and Actor. To see a sample of Daniel's work or to get in touch, please visit https://danielarchibaldbuck.org/