Diary of a wimpy kid is a book made by an athour called jeff kinney. 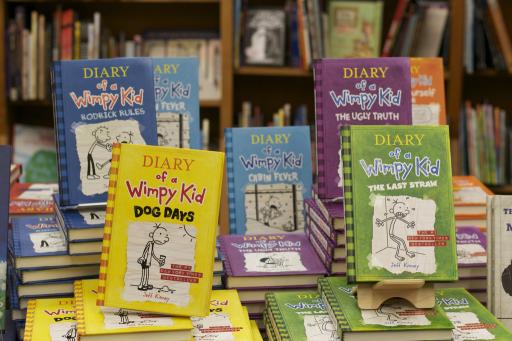 I have all the 1-10 books .It is about a boy called Greg. He has ideas of being rich and famous

other ideas of Greg's future .His brother are called Rodrick and Manny Rodrick is the only person that Greg knows that is better at sleeping is his brother Rodrick. Once Rodrick's bed

was worn out so they took the mattress away and bought a new one .When this happened

bit of the bed !Manny is a boy who always gets what he wants(well most of the time.)

In the book when Greg goes on a road trip and it is a absolute disaster. Manny won a pig in a

competition to predict how much the animal ways and Manny got perfect . Greg's dad is not that keen on having a pig in a already packed car and family . Rodrick thinks it could be a good source of food for the family . They cut in a line of car's heading for a funeral so they try lead the cars to the funeral place but by accident they lead the car's to a animal burial instead and they nearly die! The pig also bites Greg and so Greg has to go to a vet to see if there is anything seriously wrong with the bite. So the parents decide to get rid of the pig and donate it to a animal give it away place. Manny get's very angry so angry that whenever he gets a chance he tries to run away! They deicide to get a leash for Manny so he can't run away but the parents get outsmarted when they ask Greg to go to the bathroom with Manny to keep an eye on him while Manny goes to the toilet but Manny climes through the window and if it wasn't for Greg's dad he would have got a ride in a car and would have never been seen again. So they decided to get the pig back so they would not have to put up with Manny running away again.There

is also a new book coming out called the getaway.