Suddenly, out of the darkness in the middle of the night, a gruesome shadow appeared from out of the wood. Immediately you knew from all of the disgusting scales it was him. Grendel: he had hideous straggly hair; from his head down, he was completely covered in green emerald scales; he had scars all over his face from his victims’ fights.

Grendel was a hideous creature, but no-one really knew what his eyes looked like because if you ever saw them, your life would come to a ghastly end. Wherever he went, he would leave a trail behind him like a vile poison which made the sky go dark. That was when everyone knew that Heorot’s peace would be shattered once again. 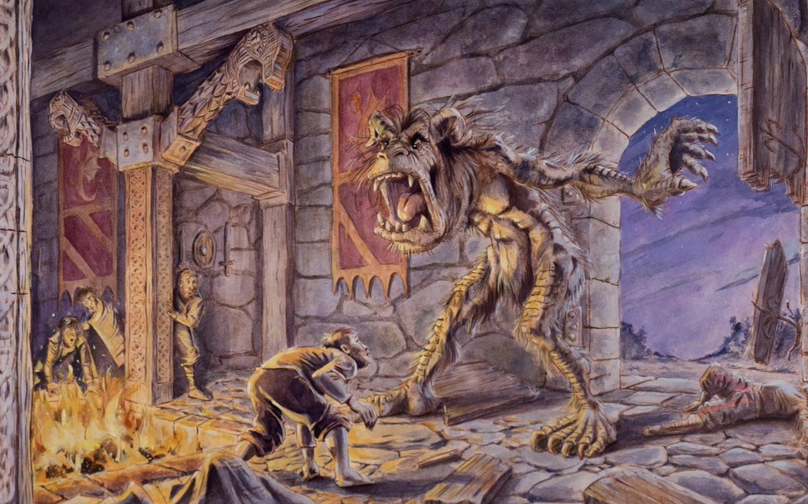 As he emerged from the woods, he lumbered towards Hrothgar’s silent mead-hall dragging his feet behind him, ready to devour everything in his path. He licked his shrivelled lips with his lumpy black tongue, ready for his victim’s blood.

As the hideous creature lumbered towards the great mead-hall, he could already smell his victim’s flesh. However, what Grendel didn’t know was what awaited him at the entry of the great mead-hall. If he did know, he would have thought twice about entering the mead-hall and definitely have turned back.

Grendel was only afraid of one man: Beowulf. This ghastly monster was not afraid of anything but him. As no metal could touch his skin, he was completely undefeatable. However, when it came to the man who had the strength of 30 men in each hand, he would be truly destroyed.

As he banged on the heavy, oak door, he was approached by a tall man covered in iron armour. With the monster’s horrendous power, he clenched the man’s neck with all his might and then threw him on the ground killing him in seconds. Then, much to his surprise, Beowulf sprang out of the darkness and grabbed Grendel’s arm. As the vicious creature wrestled for freedom, he realised that he had no fight left in him. Quickly, he noticed that he was getting weaker and weaker. Now, his arm was starting to go numb and he realised that these next few minutes were going to be his last. He noticed that the man’s grip was getting tighter until Beowulf wrenched on his reckless arm and ripped it right off leaving the demolished creature to plunge into the river leaving Heorot behind and joining his mother in hell once again.

Still today, you can see the slaughtered monster’s arm hanging on what is left of King Hrothgar’s mead-hall. It hangs there on the greatest ever mead-hall in pride that Beowulf the Hero had destroyed the vile monster Grendel.