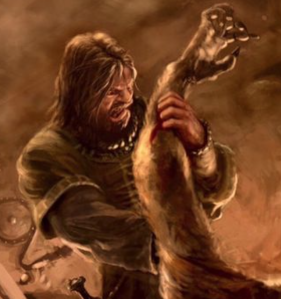 Great fists belonging to the most hellish, unfortunate body in the realm prepared to snap the bones of its victims. Battle wounds exposed the rotting flesh and leaked blood. Once calm and majestic, the now forgotten forest had become the home of the most feared creatures of the Danish population. Wrenching the barkless logs out of his direct path, Grendel stormed through the dense forest. Occasionally, a deep roar would stalk the people of Denmark: it was as deafening as a wolf howling from the top of a cliff; ear-drums crumpled at the sound and anyone within 100 km would, for sure, be driven insane.Skeletal scales enclosed the jelly-like body. In only fifteen minutes, his steady stumble to King Hrothgar’s kingdom was complete. Drawing back his fist, he prepared for impact.

As sturdy as the foundation of the great mead hall, the newly-repaired colossal door was destroyed without being a hindrance to the beast. To him, this was an ordinary night. But, little did he know. The Geats’ respected prince was waiting for him. With the equivalent strength of thirty of the best guards on each side, Beowulf was sure Grendel would be no hard fight. It was the perfect counter-attack. Using his withered, ghastly fingers to pluck his helpless victims from their fitful sleep, Grendel licked his blood-stained lips. Handscio (the monster’s first and last kill of the gloom-filled night) was brutally bitten by the fangs of the beast. Preparing to take his second man alive, his arm was suddenly wrenched by the tightest grip he had known. He felt a rush as unforgiving, intense anger took hold of his enchanted body.

He knew he was right to be petrified. Nothing, not even the grip of his sea-dragon mother’s hugs or punishments when he was a child; feeding his rotten hand to the immense jaws of the Muncher, hanging him from theenchanted seaweed and, worst of all, taking him to the sea-devil—none of these were as terrible as this.

As quickly as water falling from a waterfall, his great power was draining from his beastly body. Muscle tearing, bones snapping, veins popping. It was like torture. It was torture. His arm was no longer in its socket. And soon it was off. Never to heal.

With his bare hands, Beowulf had stopped a 12-year threat in three minutes. He was a hero. A hero worth having.Grendel was in pain and pain that would not stop until death. Luckily for him though, it was close. So he went to his mother to pass on to hell.Back in Hrothgar’s kingdom, spirits were high. They were free. They had the arm of the beast as a trophy.