On Monday 11th January 59 pupils from Year 5 and 6 in Johnstown Primary School went on the Urdd City sleepover in Cardiff Bay.

On the Monday, we went to 'Big Pit' in Blaenavon to explore the mine. Later that night we went to watch 'Snoopy and Charlie Brown', the Peanuts Movie.

The next day we travelled into the city on a water bus to get to the Millenium Stadium (Principality Stadium) for a tour. We were all very excited.

Later that day, we went to Cardiff Natural History museum, once we did that we caught a bendy bus back to our hostel. In the evening we went bowling.

On the Wednesday we went to Cardiff Castle.

It was the best Urdd school trip EVER!!!

On the way to the Urdd Cardiff sleepover, the urdd members went to the Big Pit. It was a coal mine that has operated since WW2. We all walked up the hill to the original miners canteen. When we got there we walked in and came across the miners original lockers and showers. There were facts on the lockers about them.

After that, we pulled a Dram with fake coal in it-it was very heavy. We explored the mine's museum and looked at clothes and artefacts from miners back in the Victorian Times.

We couldn't go down the actual mine because of the weather and there was maintenance work going on in the mine. But we had a simulation of going into the mine-it was dark and narrow. Can you believe they have stables there for the horses that lived in the mines every day!

Finally, we went down the hill to go to the gift shop.

On the Monday night, we went to cinema in the Dragon Center to watch:

Charlie Brown, Snoopy, Lucy, Linus and the rest of the beloved "Peanuts" gang make their big-screen debut, like you have never seen before.

We all really enjoyed the film and throughly recommend it as a film for all our Johnstown families to enjoy too.

1. What tries in Cardiff, but sometimes gets

2. Who did not go to school but worked all day?

3. What has old Cardiff artefacts in?

4. What is old and stands guard over the city?

5. What can hold 90 people, is made from concrete but can float easily?

Tuesday morning we arrived at the Millennium Stadium we had a look at a few different rooms then we went into the changing rooms and saw all of the International Welsh Rugby players shirts.

After that, a speech came on and was inspiring us by saying how you come in as individuals and come out as a team, it doesn't matter if you win lose or draw just go out there and give it your all then you should have done you and your country proud.

Next, we entered the football changing rooms. Having a look and being able to touch any of the shirts was one of the best experiences ever. Then we left the changing rooms and hopped onto the lift to go down to the tunnel. The amazement of walking through the actual Millenium stadium (Principality stadium) tunnel felt so exciting with all the atmosphere around us. We could imagine all the crowd screaming and shouting for us. I couldn't believe I was walking in the footsteps of many famous sportsmen.

After that, we went back onto the lift to go up to the President's Box. When we got there we saw the VIP seats. They were the most comfortable seats in the stadium but they were the cheapest- you had to be invited to be able to sit there! So many famous people had sat in one of those seats. The seats were so posh that even the Queen had sat there.

Did you know that the Millenium stadium is the only stadium in the UK that has a retractable roof. They also employ a 'hawker' to fly a hawk around the stadium twice a day to keep smaler birds from nesting in the roof.

This tour was the best experience EVER!

Watch us walk down the tunnel just like the Welsh players! 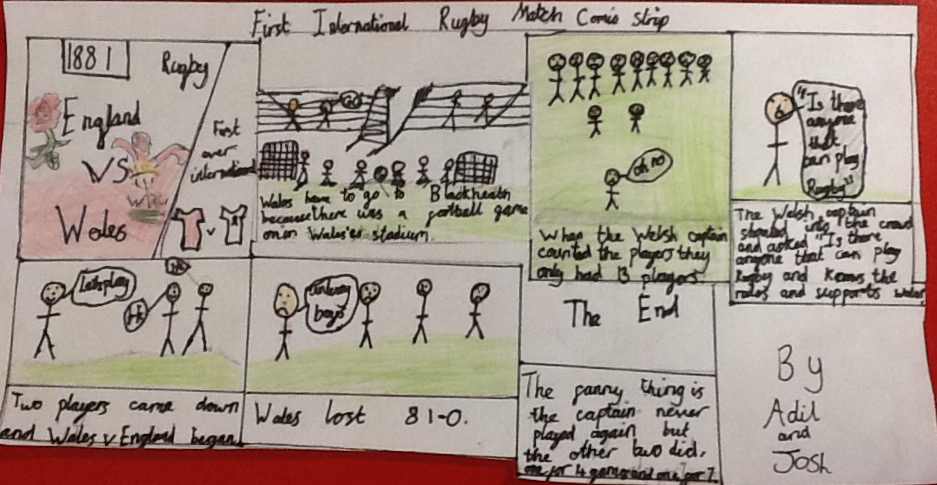