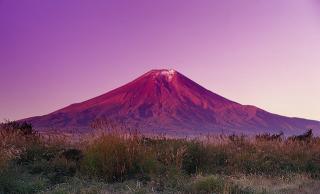 Volcanoes are a well known aspect of life. Some people think of them as natural disasters, others as beautiful wonders, but whatever you think about them, there is a lot that people do not understand. This slide will assist your learning about these incredible mountains.

How are volcanoes formed?

A volcano is actually a mountain. It is formed when hot magma from the Earth's mantle finds its way to the Earth's surface. It eventually finds its way up through the top of a mountain, literally blowing the top off. Dust and ash ride into the air, along with lava (the term used to describe magma outside of the volcano.) 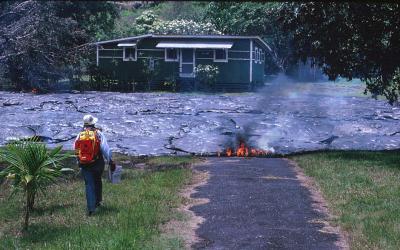 How do volcanoes impact on everyday life?

For example, Mount Vesuvious errupted in 79 AD, burying the whole of Pompeii in ash, rubble, and molten lava. Everybody died, except the lucky few visiting families, out of the area.

Bodies, perfectly presereved, were discovered in the rubble, and they show the images of horror and utter terror portrayed on the faces of the victims. It is a disturbing sight, but proves the tragedy a volcano erruption can be. 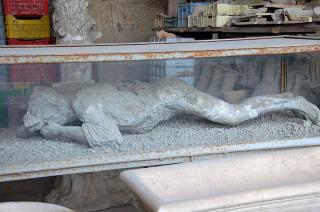 However, not all volcanoes are viewed as life-threatening dangers. Some are considered as natural beauties; wonders of the Earth. This next page will show you the other side of these mysteries.

To see more information on volcano locations, see the next slide.

The natural beauty of a volcano is revealed in these images.

so the amazing views can be observed as not a threat, but a wonder. Some

volcanoes won't stay dormant forever, so in our future we may have yet

problems with these landscapes.

out dust and rock, smaller than 2mm. This is called pyroclastic flow.

It is nearly impossible to escape this 'dust cloud', as it can travel at up

to 450 mph. Anyone in its way will be choked by the gasses and stones

hidden inside the cloud.

On Earth, there are over 1700 volcanoes that have been recorded to be active in the last 10 years. However, not all of these have erupted.

And that's all you need to know about volcanoes!